A connection to this land in very ancient times. Warming and moving what has been frozen through trauma. Allowing a coming back into life. 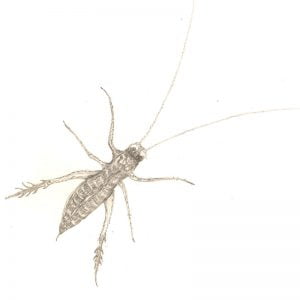 This remedy was made in the Parnell Rose Gardens in May in the early afternoon. A few times I had been in the city walking up Clevedon Road. I found weta moving on the pavement. I was shown very clearly exactly where to make this remedy. I had been going regularly to the Parnell Rose Gardens observing nature in the city and I was concerned as the time of making this remedy was a very busy thoroughfare of people coming and going. During the whole time I made this remedy no one came by, it was remarkable and then just when it was finished a father and his young daughter walked across the park bringing back movement and sound. The feeling that the world just paused was palpitable.

A connection to this land in very ancient times. Warming and moving what has been frozen through trauma. Allowing a coming back into life.

Deep cerebral process and an anchored stillness before movement. Allows the ability to go deep into issues without losing the overall vision. Use for helping to get out of a co-dependent relationships. Examining the shadow place of where you are dependent to the other person and taking responsibility for this. Examining the role we take in relationships and realising our own power in shifting out of these roles. The weta remedy enables a fluidity where we have become frozen, the feeling in taking this remedy is a connection to an ancient source, to see things from this perspective allows us to understand the transient nature of life.

There is an aspect of this remedy that brings up shadows that lie hidden. To face the truth even if its ugly. To move and shift what has been held through hatred and fear. It can be very powerful, it is recommended that you take time to be aware of your reactions to others and take some time to nourish yourself, particularly if some deep emotional memories come up for you.

The weta is fairly common on Waiheke and around Auckland, and most gardeners come across them particularly when trimming a hedge or working with palms. It tends to hide during the day and at night feeds on the succulent part of bark and foliage and occasionally on other insects.

David Millar in “Common Insects in New Zealand” comments that they sometimes feed on their own kind. There are two kinds of weta, the robust and heavily armoured weta found in the trees and the more fragile cave weta, with long legs and small bodies. The tree weta is long lived and there are some, particularly the giant weta that is found on Little barrier Island. According to David Millar the limbs and the antennae can be lost but will partly or wholly be regenerated although not to the original length. There are also indications that each species has its own odour.

Millar describes sounds of the bush or tree weta as if dry hands are smartly drawn across each other or sometimes like striking a match. It creates the sounds by raising and lowering the hind legs so that a rasping structure on the inner surface of the femurs passes over a corresponding area of the sides of the abdomen. The female lays her eggs in April; they supposedly hatch in December although I have just seen a small weta at the end of October. The young weta resemble adults.