Promotes joyousness and feelings of invincibility. A powerful protector with the nature of the spiritual warrior.

Lasavia Healing Essences are the gift of vitality of plants, minerals and insects delivered to you with the utmost care. Our resolve is to deliver to you Elemental Healing through the introduction of an essence into your being.  Put a few drops in water, drink and take a moment to be inspired by the qualities of the essence that you have chosen. 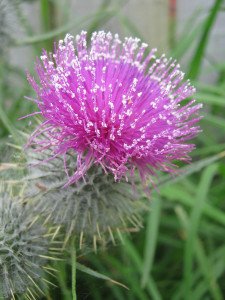 The first thing that draws my attention when I observe this thistle, are the soft silvery hairs under its leaves and stems. They catch the early morning light and appear to glow silver. A small hunter spider sits on the stem. Its leaves are symmetrical each with a longer spine and two smaller spines on each side. As I draw its leaf I think about patterns and I wonder what we do when we see these patterns within ourselves. How do we change? Perhaps it is the courage to acknowledge our mistakes. I think of a joyous courage as I try to draw that combination of softness, sharpness and symmetry.
In New Zealand, this is one of our most abundant thistles. It is a biennial, germinating in early spring. In its first summer it forms a rosette. In its second summer, between November and March, it flowers. The composite flower heads are purple and the seeds are attached to feathery down that is carried by the wind. As children we considered these seeds to be fairies. I also have a memory of sneaking out of school with a friend, climbing over the back fence into a large patch of thistles, getting the flower head and eating the little nutty piece underneath it. The leaves of scotch thistle are spiny on the upper surface. It has deep lobes, tipped with strong spines. It has a strong central taproot. Scotch thistle can grow quite large, forming well-branched shrubs up to a metre and a half high.
background
The scotch thistle became an emblem of Scotland during the reign of Alexander III (1249- 1286). According to legend a Norwegian army under King Haakon IV of Norway landed stealthily on the coast of Largs at night. To ensure that they kept the element of surprise the Norwegians advanced barefoot toward the Scottish stronghold. Luckily for the Scots, however, one of the invaders stood on the spiny point of a thistle and screamed in pain. The Scots were alerted to the presence of enemies and were able to repel the Norwegians.
With the desire to plant something symbolic of their country, a group of Scottish settlers ceremonially planted the first scotch thistle in New Zealand at Petone, near Wellington, during their St Andrew’s day picnic in 1840. The thistle flourished. A Wanganui settler later established a thistle patch around his Raupo hut to deter “barefoot” intruders. By 1859, only nineteen years after the first thistle had been planted, New Zealand was so infested by this botanical invader that Reverend Richard Taylor reported great patches of thistle down floating in the Cook Strait. 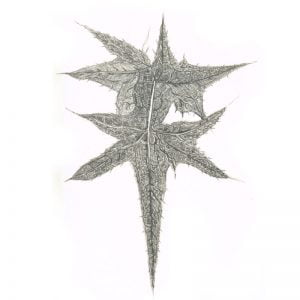 I made this remedy from a particularly large and magnificent specimen in a friend’s garden. It was without doubt the biggest thistle I have ever seen, and we partook in much laughter and joy in admiring its form. Its presence certainly couldn’t be ignored. The essence of scotch thistle contains feelings of joyousness and invincibility. When I observe the whole plant there is an uprightness and aliveness that makes you want to celebrate, even if life is full of challenges. It seems to say, ‘yes I am alive and I have cause to celebrate.’ It helps raise the energy – particularly when you have that feeling of being sunk down to the pit of your stomach. Scotch thistle is a remedy to aid those who have suffered and survived hardship. It gives hope and life aiding recovery from depression or wounds. It brings courage. It contains a quality of elation yet has a feisty edge. My friend Oraina, on meditating with scotch thistle, visioned swords on the ground and dancing on the roof all night before going to battle. It aids us to let go all the non–essentials and just step forward.