Builds back self love and respect after experiences that have lead to shame and desolation.

Lasavia Essences are the gift of vitality of plants, minerals, insects and birds delivered to you with the utmost care.  The resolve of Lasavia is to deliver to you Elemental Healing through the introduction of an Essence into your being.  We suggest you put a few drops in water, drink and take a moment to be inspired by the qualities of the Essence that you have chosen. 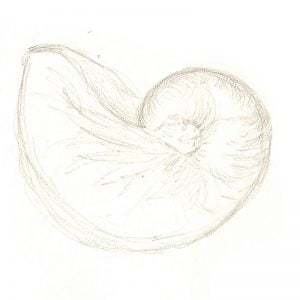 “In earlier forms, their spiral shells were as big as six feet around and weighed as much as three hundred pounds, but they rose and fell in the sea as though they were weightless.”
– from Nature’s Curious Creatures, by Bill Harris

The Nautilus is considered to be one of our living fossils, it first appeared about 500 million years ago during the Cambrian epoch. The graceful shell, from which this remedy is made, is a nearly perfect equiangular spiral or logarithmic spiral. Descartes first described the logarithmic spiral and later Jacob Bernoulli named it the ‘Spira mirabilis’ and created the formulas for it. The curvature follows this logarithmic spiral with each turn being exactly three times the size of the one below it. The size of the spiral increases but its shape is unaltered with each successive curve. This spiral structure is seen in the arms of galaxies, in the bands of tropical cyclones and even in the approach that a hawk has to its prey.

The spiral structure has within it the concept of the macrocosm and the microcosm. It denotes eternity. It is limitless and infinite in its unfolding. It is a symbol of life as being always in movement.

The spiral is at the beginning of our life – we emerge from water, as the first substance, and the vortical energy of matter and consciousness – and also at the end. Within us is the continuum of the consciousness of the beginning and the whole. It is all here for us to access and it is the wisdom of those who have come before us to have mapped the movements of the sky, the gesture of the plants and the animals, the memory of stone and the nature of energy. It is through this that we may reach for support as we find ourselves stuck in negative grooves and patterns that seem at a variance to our purpose. Here within us we have an access to the totality and to sudden flashes of inspiration that can shift us swiftly from one state to another. This is the spiral journey.

The Nautilus starts creating the shell as soon as it has hatched from the egg. It begins about the size of a pea and at each successive stage of its development it moves into a new chamber and seals off the old chamber. These chambers are gas-filled flotation chambers and each chamber is connected by a small tube which acts like a siphon and regulates the density of the gas, enabling the nautilus to rise to the surface of the water.

It moves shell first so that it can’t see where it is going. The Nautilus spends the day hiding down in the depths of the ocean approximately 400 metres down. At night it ascends to the surface to feed.

The Nautilus’ tentacles function in smelling and manipulating but also carry highly developed chemical senses so it can detect traces of the predator as well as its food. Its main predator is the octopus.

The Nautilus is rare and is protected in that it is now illegal to export Nautilus in most countries.

Information from the divine flowing into ordinary life. Therefore giving insight and synchronicity. Builds back self-love and respect after experiences that have led to shame and desolation.

This remedy was made on the eastern end above Matapana Bay, Waiheke Island. It was a remedy that kept singing out to me and in some healing work the remedy started to come through very strongly. There was a strong auditory signal as to the timing to when to make it.

In the making of this remedy there was a white to light yellow energy form that worked in my mind, my throat and my hands. I was also shown the quality of an expressive dance where movement arises to express the energy. Starting slowly through the head, then the hands and then the feet. As the feet became touched with this light the dance gained momentum. Firstly forward and backwards as the energy moved to the front of the body and down towards the feet. The energy then moved towards the back and then repeated its flow. In this place I could sense other dancers moving together. There was a divine surrender in this movement, and in my mind’s eye, I saw the swirling dervishes, their movement through from the divine.

This remedy brings us to remember the great spiral journey. It puts all the stresses of our life into perspective. It reminds us to lift out of the overwhelming humdrum, the demands that pull us away from what is important to us. Chambered Nautilus reconnects us to our purpose.

This is the ship of pearl, which, poets feign,
Sails the unshadow’d main, –
The venturous bark that flings
On the sweet summer wind its purpled wings
In gulfs enchanted, where the Siren sings,
And coral reefs lie bare,
Where the cold sea-maids rise to sun their streaming hair

Its webs of living gauze no more unfurl;
Wreck’d is the ship of pearl!
And every chamber’d cell,
Where its dim dreaming life was wont to dwell,
As the frail tenant shaped his growing shell,
Before thee lies reveal’d –
Its irised ceiling rent, its sunless crypt unseal’d

Year after year beheld the silent toil
That spread his lustrous coil;
Still, as the spiral grew,
He left the past year’s dwelling for the new,
Stole with soft step its shining archway through,
Built up its idle door,
Stretch’d in his last-found home, and knew the old no more.

Thanks for the heavenly message brought by thee,
Child of the wandering sea,
Cast from her lap, forlorn!
From thy dead lips a clearer note is born
Than ever Triton blew from wreathed horn!
While on mine ear it rings,
Through the deep caves of thought I hear a voice that sings:-

Build thee more stately mansions,
O my soul,
As the swift seasons roll!
Leave thy low vaulted past!
Let each new temple, nobler than the last,
Shut thee from heaven with a dome more vast,
Till thou at length art free,
Leaving thine outgrown shell by life’s unresting sea!