Helps understand within what you need to protect yourself  so you don’t get caught up in other peoples stuff. Smile!

Lasavia Essences are the gift of vitality of plants, minerals and insects delivered to you with the utmost care. The resolve of Lasavia is to deliver to you Elemental Healing through the introduction of an Essence into your being. We suggest you put a few drops in water, drink and take a moment to be inspired by the qualities of the Essence that you have chosen. 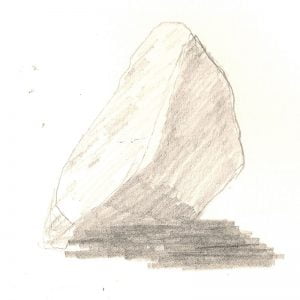 ‘The rocks of Waiheke Island are mainly greywacke sandstones and argillites, interbedded with cherts, jaspilites, and fine-grained volcanic rocks with some pillow structures’.
Healther M Halcrow, ‘Geology of Waiheke Island’

The pyramid rock is named simply because it is in the shape of a pyramid. It was found at Enclosure Bay, Waiheke and is a greywacke sandstone. This is rock made up of greywacke. I started the process of creating this remedy at 5.30 a.m. on 28th July 2002. The tide was coming in and I placed the rock on a small rocky tidal island.

Before I made this remedy I experienced the rock inside of me, the base in the base chakra and the point on the larynx. It was a clear pre-dawn, I was aware of Matariki (Pleiades) sparkling in the east. The remedy stayed on the small tidal island for three and a half hours while the tide came in. The ocean, the stars and the early morning light were vital elements to this remedy. 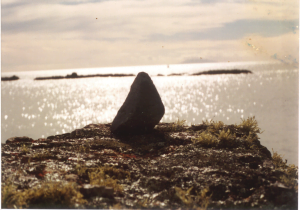 Opens your vision, prepares the way to breakthrough outmoded structures.The potential for Balance, being grounded and responsive with lightness and humour.

This remedy expands vision, and supports where there is deep inner vision required, the visions that come through to help us readjust or align to our higher self. It is a strong and mature remedy and therefore is not recommended for children or those who are infirm. There is a quality of deep compassionate love that is imbued from Matariki. I experienced a strong feminine force coming from matariki when the remedy was being made. This feminine force helps strengthen your inner purpose through understanding. This enables you a greater ability to protect yourself – so you don’t get caught up in other peoples stuff. Looking out for you, the energy she brings is like graceful smile.

Pyramid Rock remedy expands our awareness to the energy behind the elements. It brings awareness to our inner conflicts. These inner conflicts create pathways that are about difficulty or struggle. Through awareness and observation of mind you can begin an experience that is about creating your life through an unfolding of your desire. There is an invitation to meet and receive the support and guidance that is there for you. It bring awareness of the patterns and structures that are outmoded and hinder you and invites you to break through. In many ways pyramid rock opens you up to the hearts mind.

It’s a remedy of the east, particularly of breakthrough with a beautiful grounded quality. There is here in this remedy the quality of balance. This rock will stabilize the chakra at the base of the spine. It brings balance to the liver and the kidneys. It has intrinsic to it the power and symbolism of tide. Allow for fullness, allow for emptiness, allow what is revealed in emptiness, allow the power of fullness.