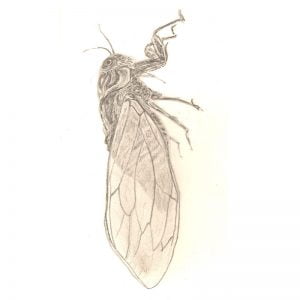 (Amphisalta means player of two harps – referring to their ability to make two distinct sounds at once.)

On Waiheke in the mid-summer the cicadas are deafening, particularly in certain areas of kanuka or manuka scrub. It is incredible to just stand in the sound scape of these creatures and experience the resonance. A sound healer once told me that the effect of the vibration of the cicada was similar to the healing properties of Tibetan bells (although I haven’t yet found further evidence and information of this.) Their song has been measured at 120 decibels, that’s 40 decibels over the level considered to be dangerous to a person’s hearing.

This remedy was made in the height of summer and at the peak of their sound. It is a remedy filled with the vibration of their sound. The experience of making it was profound. I experienced a sensation of a vibrational energy that went through the centre of my body. It showed time in a vertical sense with a complete acceptance of where I was in the journey of my life.

Oblivious of when it will die, the cicada chirrs.
Basho

This essence is about the celebration of a completion of a cycle. It helps us to let go the difficulty, the bitterness of hard times, allowing warmth and happiness to seep back in. Telepathy is enhanced with greater awareness of messages received, and this essence enhances our abilities in regards to extra sensory communication. It will work with the senses that you are dominate in, for example if you are a visionary you will get clearer visionary messages. A strong connection to the heart supports the ability to meditate and be present to the emotions that may rise up within us; this essence helps strengthen this connection.

Mahiinarangi Tocker who sang with Kiri on the Maori CD says she was told by her elders that ‘Tarakihi’ is from Ngati Maniapoto. It is more than 300 years old and talks about the cicada as a huge strength.

The cicada comes under the order Hemiptera, the order of insects that suck plant sap, or animal blood. For this purpose their mouths take the form of a piercing and tubular proboscis. The sub-order for cicada is Homoptera, uniformed wings, and the family itself is called cicadidae. The most common cicada on Waiheke is ampipsalta zealandica and it’s considered to be the loudest of all cicadas. David Miller in his paper, ‘The Insect People of the Maori,’ argued that the word kihikihi is derived from kihi, to make a murmuring sound, a sibilant sound. While wawa means roaring noise, a sound like pattering rain. Interestingly Maori compared the comparatively noisy English language to the noise of cicadas (He reo kihikihi – The cicada language). The Maori were also expert at distinguishing the different songs of each species. Johannes C Anderson, writing in 1921, (Transactions and Proceeding of the Royal Society of New Zealand) argued that, “The cicada’s song was liked by the Maori above all others.” Indeed, he called the cicada “the bird Of Rehua” Rehua was the lord of kindness and the reason the Maori held the insects in such estimation was that its cheerful song sounded in summer when the days were warm and long and food was plentiful.”

Both Maori and Native Americans identify the insects with Sirius, which is at its meridian in the summer sky when the larvae emerge.

In a story by Pam Brukx, published in the ‘New Zealand Journal of Natural Medicine’, Dec 2011, she relates her personal journey into Tinnitus. Through years of journeying she uncovers the powerful co-relation of tinnitus to emotional inter-reactions with fellow humans, writing, “Time after time without fail, I would experience the mating cicada sounds in my head before or during any positive interaction or post of a positive nature was received. The coming of a call or news that was worrying to the giver of that news and not the receiver was always experienced beforehand with a low throbbing hum vibration.” Brukx argued that the cause of tinnitus is that someone wants to send a certain emotion, to make contact or to find a way to come through to you with a message. These emotional signals that are given out can create in some people a vibration similar to the sound of a cicada, particularly if the signal is a joyous one.

It is the male cicadas that sing whilst the females are without voice, although she will answer the male with wing clicks. Each male has its own distinctive song so that the species can locate the correct mates. In “New Zealand Insects and Their Story” Richard Sharell describes in detail how the sound is created. In short, on the underside of the abdomen there are two half-rounded scales. These are the lids covering the sound apparatus. Most of the abdomen is hollow creating a sound box. There is a ridged membrane called a tympanum and in the upper part there are two tightly stretched membranes. Clusters of powerful muscles alternately tighten and release the tension on these membranes, causing a vibration, which is amplified by the air chamber.

The life cycle of the cicada starts with the female depositing her eggs into the bark of a twig by creating a cavity through her sharp ovipositor. The tiny larvae hatch and fall to the ground, burrowing into the soil until they find a root to attach to and suck the sap. The larva’s life is spent in total darkness, feeding and moulting and growing. In the final moult the wing pads are formed, and the larvae digs its way to the surface with powerful forelegs, climbs up a stem and anchors to the support. Usually during the night-time, the skin splits at the back and the mature cicada emerges.