Embodies the earth element, Saturn and the stomach.  The ability to absorb and utilise nourishment, well balanced, safe. 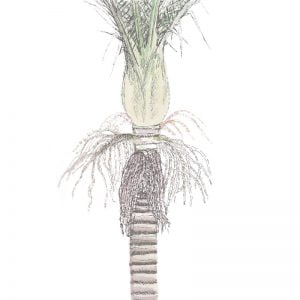 Nikau are New Zealand’s only species of native palm. They’re also the world’s southernmost naturally growing palm. The trunk is ringed by the leaf scars. The leaves are palm fronds, which form huge baskets at their base. It flowers in the early spring and are monoecious. The flowering part of the tree is enclosed in two spathes. The flowers are arranged in groups of three along the inflorescent branches. Each group comprises a small female flower sitting in-between two male flowers. After the male flowers have dropped off, the female flowers open. This prevents cross fertilisation. When the fruits ripen they attract Kereru, who feast on the berries. Nikau will withstand fire. After a big bush fire most of the trees are killed except nikau, cabbage trees and fern trees. The fronds fall off with a crash, but the trunk and bud, from which new growth comes remains undamaged.

In ‘Plants of New Zealand’ Laing and Blackwell documented how the Maori used nikau for thatch. ‘ The Maori used the nikau leaves in the construction of their whare, or houses. A framework was made of Manuka sticks, and the roof and walls composed of palm leaves, which formed a covering as watertight as if built of iron. These leaves keep out the wet in a marvellous manner, even when the thatching is so open that one can see the clouds and stars through the interstices. Every separate leaf division is a little channel, which conducts the rain drops to the ground outside.’

The essence of nikau contains a natural reverence for and a pleasure of the ordinary aspects of life. It engenders the creation of a nourishing structure with a beauty of design to help us flourish in our lives. Nikau brings forward the knowledge of community, reminding us that we need interdependent relationships and a non-exclusive process to build healthy groups and strengthen community. Nikau helps us to become aware of isolation and where we may need to connect to others with a common interest.

Nikau is not easily transplanted; it represents the quality of staying in one place and the contribution to the place and community that comes from being settled. There is knowledge gained by spending time in one place.

Nikau helps us understand the natural order of things, that we can’t always make events happen to our liking. For those who demand that the world bend to their will, nikau will allow a bigger presence, helping them see that they can’t push the river against its flow, and that there is abundance and nourishment in going with the flow of life. It encourages community-anchored action, based in a wider vision of consequence.

Nikau naturally shows us a way into eldership.

Nikau
in the dark
in wet gullies
on the slope of a paddock
I come across you
a tribe
upright
strong
with orderly precision
with purpose
with place
criss cross
tapered green ceilings of skyclusters of purple
and creamy flowers
red berries
on patterned drupes
and there the kereru feeds
full
whole
complete.