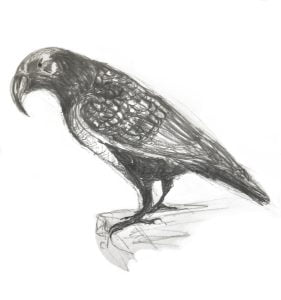 Essence: Dispelling illusion; facing truth; fearless, having no qualms; looking at what is hidden; joyous, intelligent and playful.

Use: For times of confusion, disharmony and to support a breakthrough from self-deception, also where there has been a loss of connection to one’s truth within groups and community.

Description: The kākā is a forest parrot. They were abundant in the forested areas of New Zealand but their numbers rapidly declined as forests were burned for pasture and exotic pine plantations, even up until the 1970s. They have only recently returned to Waiheke Island, from Little Barrier Island, as the land is slowly reforesting. They like to gather in groups and are active and social in the early morning and evening. They are partially nocturnal and I hear their call in the night. Kākā are omnivorous. During the day they feed, solitary and silent, using their powerful beaks to tear off loose bark, breaking up decaying wood and extracting larvae from live wood. They also eat many kinds of seeds, succulent fruits and have a brush tongue to take nectar from flowers.

Meaning: Kākā initiates. Kākā invites us to have the courage to look. The truth is often concealed by the stories we live by and the roles we play out in our communities. Its qualities can be sudden and revelatory – particularly in seeing the hidden agreements made around people’s stories and where a group can be manipulated through one person’s self-deception. This remedy shows up our patterns of avoidance, like a teacher setting us up so we can learn. It brings awareness to boundaries. It shows up the way things are in relation to each other. This quality of perception brings clarity to action through consciousness. Fear of loss is the shadow of kākā – when we lie to ourselves but do not know because we are unconscious. In this darkness there is a distortion, a fear of growth, shadow protection through stories and deception. Kākā can awaken a conscious choice to look at what we may hide from ourselves. Kākā does what it does, straight to what is underneath. If there is sorrow, it is uncovered. If there is fear, it is seen and acknowledged.

There are no reviews yet.

Be the first to review “Kākā” Cancel reply