Releasing self-restriction, where rules and laws have been created from a past incident and are no longer necessary. 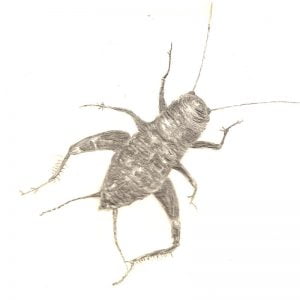 From the order of Orthoptera – Straight wings.

When I think of black crickets there is something about them that is like the shadow in the night. This remedy was made on Waiheke after I had done some land healing on a sheep farm. At a moment near the end of the healing work, all these black crickets came out of the cracks of the ground even though it was still very hot. I made this remedy whilst they were still there. They moved all around the remedy whilst it was being made. In my minds eye I still see very vividly the cracked clay, dry grass, the heat of the sun and the black, black crickets.

Releasing self-restriction, particularly where rules and laws have been created from a past incident and are no longer necessary.

To reveal unconscious material. To point towards the shadow in an issue. Being able to work with the past, past events and taking the out the good and the useful from this. Through this process it enables you to move forward. Courage for action, the nature of jumping in ‘boots and all’, therefore being fully part of life and knowing that it is all part of a bigger weave of life. Able to go forward simply for the adventure and the exploration.

Shining a light in the darkness when you are made to experience blindness in your path and can only go from one point to another without seeing the bigger picture.

Ability to take in what life presents to you and transmute it. Cricket is capable of ingesting all sorts of stuff and can cause havoc in a house as it searches for moisture.

A remedy that is helpful in the face of chaos and when through trying to act your actions becomes futile. Sometimes in busy work places where you find yourself jumping to other peoples stress and urgency when the best action is to do what you know. Take cricket for this and see how you are able to get through the work in a more efficient way. Crickets sing in unison and its medicine can help put a process into the right order.

Voice of summer, keen and shrill,
Chirping round the winter fire,
Of thy song I never tire,
Weary others as they will,
For thy song with summer’s filled
– William Cox Bennett

They have big-thighed, jumping hind legs. The males sing by creating friction on the forewings. The sound is created by the rasping structures at the base of the fore wings, which are rapidly drawn over each other, the wings being held up at an angle during the process. Both sexes have ears located on the shins of their forelegs.

During the day the crickets shelter in the cracked ground or under any convenient object. The female deposits her eggs in the cracked ground during late summer and autumn. There the eggs lie dormant until hatching in October. The jouvinile crickets feed on ground vegetation until their wings gradually develop until, in mid-summer, the adults finally appear.

The crickets grow by shedding their skin on a regular basis, and after each moult the crickets utilise the trace elements contained in the skin by eating it. At night they feed on the grass surrounding their cracks.

Calculations show that if you have five crickets per square metre grazing on your paddock, you’ve got the equivalent of one extra stock unit in the form of invertebrate herbivores.
Scratching for a Living by Rudd Kleinpaste