Balancing individuality with working towards the common good of a community or enterprise. 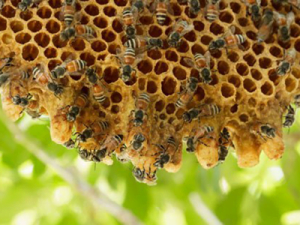 The beneficial nature of bees was revealed to me in my earliest childhood memories. A bee would only sting once and only if disturbed where as the wasp would sting many times. If a bee was respected it would have respect for you. I remember also seeing the honey dripping from muslin in the shed of the Dibbles farm. Its beautiful scent and warm colour is still vivid in my memory, along with a sensation of finding my hearth or my anchor stone. I would also go honey-stealing excursions with my father into the pump shed, where the bees had created a marvellous hive. I used to feel that they knew we were coming ahead of time and although they would chase us with our sackful of honeycomb they never stung me.

Bees call me to attend to what is important and to what has been neglected. It’s curious that I made the bee remedy first, before the other insect remedies. I made it with Oraina Jones, who loves bees and has that special relationship with them; she is compelled to save them from drowning, from cobwebs from being trapped. She’ll stop whatever she is doing in her commitment to setting them free. This remedy was made from a wild hive where there has been no honey extracted by humans. The way it was made was putting the bowl of water near the entrance to the hive throughout the middle of the day with the intention of receiving the energy, not only of the worker bee, but the nature of the hive itself. To our sorrow two bees drowned in the water. 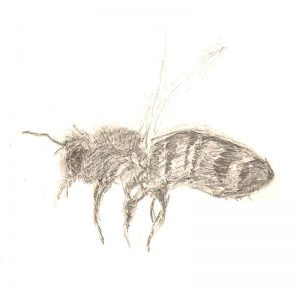 Knowing your expertise within a social context. Balancing individuality and self-determination while working towards the common good of a community or enterprise.

Rich and mellifluous, this remedy offers a connection to source and an experience of unity. It allows an experience of receptivity and nourishment through an encounter with nature. It supports the ability to integrate opposing forces without a need for conflict. The remedy is powerful in identifying and owning the shadow-self at work within a relationship allowing us to recognise the part we play in the outcome of our lives and relationships.

It brings focus and direction to projects particularly projects of a social nature. It helps us to express a sense of joy and peacefulness, supporting a pathway of action. Particularly helpful when all directions feel blocked and actions seem futile.

Take for joy from the palms of my hands
Fragments of honey and sunlight,
As the bees of Persephone commanded us.
Not to be untied the unmoored vessel,
Not to be heard shadow walking on fur,
Not to be mastered terror growing in thicketed life.
We have only kisses now,
Furred like the smallest bees
Found dead after their flight from the hive.
Bees rustling in translucency of densest night,
Their home the sleepy forest of Taigetos,
Their food time, lungwort, mint.
Take then, take for joy my wild gift,
A plain dry necklace of dead bees,
Bees that changed honey into sunlight.

The Physical attributes and other interesting facts about bees

The bees come under the order of Hymenoptera (membrane wings). The main groups under this order are the petiolata that have waists and the sessiliventres that have no waists. The bee group comes under petiolata and the name of the group is apoidea. The characteristics of this group is that the adult feeds upon the nectar of flowers, while its larvae are fed on pollen mixed with honey.

The first honeybees to be introduced to New Zealand were the black strain, brought from Australia in 1839 and liberated at Hokianga where they were established. In 1879 settlers introduced the Italian strain from England. In New Zealand bees are cultivated for honey for domestic markets and also for export (manuka honey has become world famous for its healing properties), but they also live in a feral state, inhabiting trees and buildings. On Waiheke they tend to favour the pohutukawa tree. They live in complex hives and have an incredibly well ordered society.

Human kind has an ancient relationship with bees, and stories are told about them across many cultures, particularly in reference to the relationship with the spiritual and the soul. In Egyptian mythology it is said that when Ra wept, his tears were honeybees. Joanne Lauck in her book The Voice of the Infinite in the Small suggests this is symbolic of the ability to transform compassion into something beneficial and greater than itself. The poet Antonio Machado expresses this so aptly when he wrote,“Last night, as I was sleeping, I dreampt – marvellous error! That I had a beehive here inside my heart. And the golden bees were making white combs and sweet honey from my old failures.” It is as if the bees transform our own grief, our mishaps, offering us a simple acceptance that we can create something out of our past, with the touch of warmth and joy in the sweetness of honey.

When we contemplate the worker bee, we realise what a remarkable creature it is. We often feel a sense of peacefulness, a moment of solace, and we maybe touched by its single mindedness. I see the worker bee as an expression of opposites. The reality of sheer physical work they undertake is astonishing, and the worker bee carries her own weight in nectar and pollen, literally working herself to death. The life of a worker bee is not a long, and those that hatch in early spring die in summer. Each worker visits approximately a thousand flowers everyday. Their duties are multitudinous; they’re the builders, brood nurses, honey makers, pollen stampers, guards, porters and foragers. These tasks are related to their developmental stages.

In contrast, however, to their incredible social organization, they exhibit a peculiar individuality, bordering on chaos. Peaceful, confident, order and purpose are all words used often used to describe a hive. Joanne Lauck mentions James Gould who considers bees so distinctive and individual in their characteristics that they can be recognised by their differences. He also suggests that “bees, like ants, live at the edge of chaos where life and new possibilities abound”(2)

Notes 1: from ‘Times Alone’ selected poems of Antonio Machado. Translated by Robert Bly. Published by Wesleyan University Press 1983
2: from the voice of the infinite in the small by Joanne Elizabeth lauck published by Shammbhalla 2002 p141.