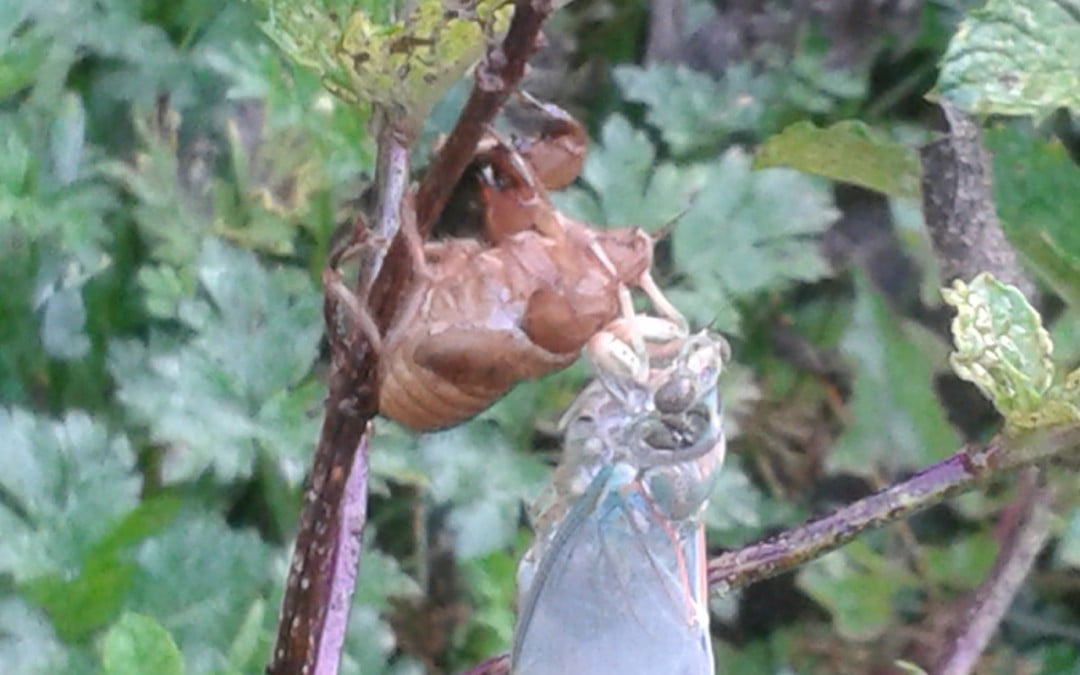 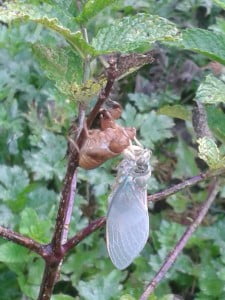 In the early morning, I got stuck with my writing and wandered around the garden. On the mint was a cicada. My immediate impression was that it was the most unusual species of cicada I had ever seen and then I saw it had just emerged from its larvae form leaving its empty brown case beneath it. Its gesture was a protracted stretch into stillness.

It lifted its right foreleg like a conductor drawing out a long slow note from an orchestra.

The life cycle of the cicada starts with the female depositing her eggs into the bark of a twig by creating a cavity through her sharp ovipositor. The tiny larvae hatch, fall to the ground, and burrow into the soil. They are looking for a root to attach to and suck the sap. The larva’s life is spent in total darkness, feeding and moulting and growing. This time in the darkness could be up to seven years. In the final moult the wing pads are formed, and the larvae digs its way to the surface with powerful forelegs, climbs up a stem and anchors to the support. The adult cicada then emerges. The only other time I ever saw this metamorphosis happen was taking my nephews around the sculpture walk above Matiatia in Waiheke. The cicada was still emerging from the back of the larvae. The skin splits open down the back and the emergence is so sedate that it would have been possible to have run around the whole sculpture walk and come back and it would still be emerging from its case. We weren’t to know that, so we lay down in the Kikuyu grass watching, like guardians to this small living sculpture. People walked around us, paused for a few minutes looking at this slow moving spectrum and carried on.

I often write in that time before dawn and as I wander down to the garden taking a moment to drink in the stars before settling in my studio. The first sound I become aware of are the crickets, their sound is like a gentle singing that has a pulse. The cicada’s begin slowly about 6.15 a.m. building quickly to a crescendo and sound like a crackling fire, about ten minutes after they begin the first tui start to call. When I made the cicada essence it was in the mid day heat and the vibration of the cicadas went through my body, a total surround sound. It is the male cicadas that sing whilst the females are without voice, although she will answer the male with wing clicks. Each male has its own distinctive song so that the species can locate the correct mates.

In “New Zealand Insects and Their Story” Richard Sharell describes in detail how the sound is created. In short, on the underside of the abdomen there are two half-rounded scales. These are the lids covering the sound apparatus. Most of the abdomen is hollow creating a sound box. There is a ridged membrane called a tympanum and in the upper part there are two tightly stretched membranes. Clusters of powerful muscles alternately tighten and release the tension on these membranes, causing a vibration, which is amplified by the air chamber.

I think of their essence as a surrender. I was also thinking as I wandered up the path back to the house what Mike had said to me once about the process of writing. That you can have an explosion of insight in the mind then you translate that in the linear form of writing. This can be a laborious process compared to that original explosion. If you do it well then it may translate into the mind of the reader as an instantaneous process of insight. The unhurried surrender that the cicada seems to convey is like a translation of that explosion of mind and metamorphosis into the physical sedulous movement of the emerging cicada.