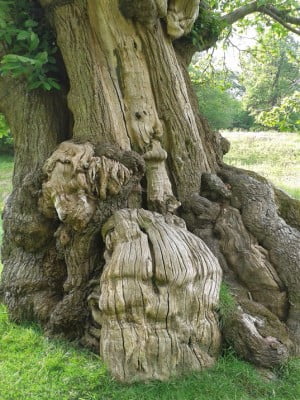 I was met in London by a tree. I had just arrived, slightly bedraggled into Charing Cross station. Missed and found, amongst the crowds, my friend Belle and together started to meander. When you come to a place for the very first time, a thousand tourists cannot lessen the sensation of arrival into a new land and also an old land, the tangible London touching the London of my imagination made up by artists and writers and rhymes.

In that state of sensory expansion, an oak tree standing alone outside Kensington abruptly caught my gaze.

Uncannily aware I was observed, observing it observing me, extraordinarily alive.

Oaks, I read, take time to mature and live to 700 years old, they are enduring and firmly rooted. I am told that my ancestors lived in the same place for thousands of years, in Clarksfield, Oldham. My part of the family left to sail to Christchurch New Zealand. I imagined my ancestors like trees, lifting up their roots, a sailing ship with an odd assortment of trees. There is a wisdom in endurance, the ability to withstand the elements, both physically and spiritually.

There’s an oak at Judges Bay, Auckland. It’s a tree that will overlook you, so that you tend to place your back towards the trunk.

You look over the harbour with it, a companionable silence, although there is a sense it is looking further than you can see.

The bark is woven with a tight weave. In finding oak I find that there are at least 200 species all unified by the creation of the unusual acorn. 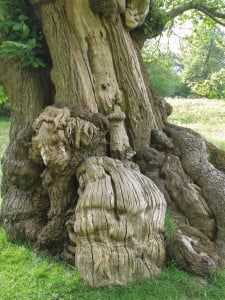 I see my family in the manner of trees, they put down roots and stay. There is a love of land, an anchoring into a place like roots into the earth. I may come and go but I belong to where these roots go down. My aunts and uncles found their place and tended to settle, one aunt lived in the same house her entire married life, my parents similarly settled in Piripai, Whakatane.

In London it was like I went from tree greeting to tree greeting. I didn’t hug them, rather well met, a shared acknowledgement. Each encounter I was affected, being touched in an other-worldly way, a blur of edges. They let me see them through the eye of the camera, each tree held its own individuality intact, apart of place, of weather and season. 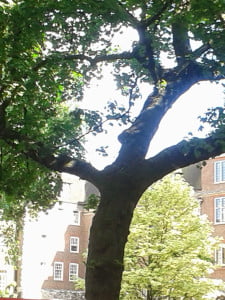 The door was opened to the trees and unexpectedly there were characters showing up. This tree appeared dotty and gorgeous. In meeting her, Belle and I started laughing. The words that came to describe her jumped out at me whilst perusing an old book called the movies published in 1957 describing the role Mary Gardner played in the movie the splendid sinner.

It was the words abandoned minx that got me grinning. On second take I also felt the grace of eccentric joy and it touched me, open-hearted. 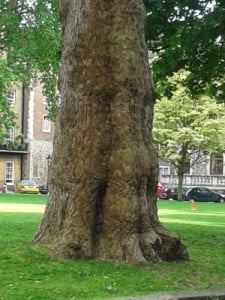 In contrast I named this tree the hunker munker tree I also thought of it as the sideways glance tree, where if one looked in a particular way of looking you could sense a door to the otherworld. A border between dimensions, where there is an experience of breakdown of identity, a merging, where the definition of either side becomes blurred.

Time, a different pace emerges, a reminder of dimensional existence amongst the human intensity in the centre of London.

I began to wonder how the forest originally stood here. A community of trees, its relationships with people, the flooding Thames and I wondered how they fared in the great frost that Virginia Woolf described in Orlando where the ‘birds froze in mid air and fell like stones to the ground.’

Trees naturally create forests, they gather together, in abundance and in difficult circumstance. I grew up with the kanuka as the only major tree in the sand dune. When they grew in the hollows they were leggy and close together, usually in a line as if they were following a crease in the fold of the land. On the wind strewn dune closer to the sea they would push their back to the wind, bending where the muelenbeckia crept over it. Underneath was cool dark sand, a hidden place that you could crawl into, sheltered from the wind and the sun.

John Fowles in his essay the tree describes the essence of trees being a community and the wider impact and inter-connected experience of an ecosystem.

“In a wood the actual visual ‘frontier’ of any one tree is usually impossible to distinquish, at least in summer. We feel, or think we feel, nearest to a trees ‘essence’ (or that of its species) when it chances to stand like us, in isolation; but evolution did not intend trees to grow singly. Far more than ourselves they are social creatures, and no more natural as isolated specimens than man is as a marooned sailor or a hermit. Their society in turn creates or supports other societies of plants, insects, birds, mammals, micro – organisms; all of which we may choose to isolate and section off, but which remain no less the ideal entity, or whole experience, of the wood – “ 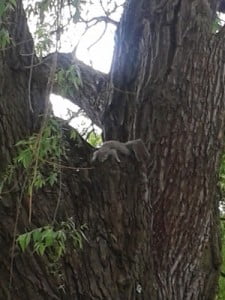 There is a pleasure to lie on the ground and look up at the forest canopy to see the branches working round each other.

Sometimes I would soften my vision to see the small auras around each twig, shaping the space, creating a pattern of growth.

We started to walk towards the National Gallery on the way we saw a squirrel flagrantly lie back in the arms of a tree as if the warm afternoon sun was to be savoured.

Squirrels and jays serve as the seed dispersal agents for oaks because acorns are too heavy. It’s called scatter hoarding where the squirrel and the jay make hoards of acorns in all variety of locations, they also retain large mental maps of cache locations. Luckily for the trees the odd acorn may get lost and once an acorn sprouts they are less nutritional. 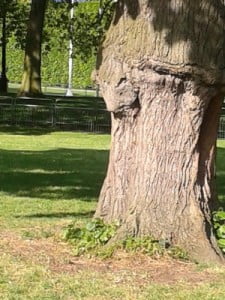 As we walked I happened to look to my right in time to see a tree with a distinct animal face. It was remarkable, it was an oak. In an unexpected way I entered London through its trees.

The following images are of the trees in Knole Park, Seven Oaks, just south of London. I always wondered if there was a word that describe those abnormal spherical, twisted gargole like protrusions in the truck and along branches and I found the word its called a burl. Burls are formed when bud growth cells deviate by dividing into many directions. The bark on the burl will often appear coarser and inside the grain is twisted and very compact. 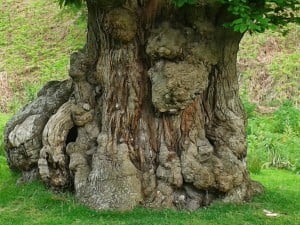 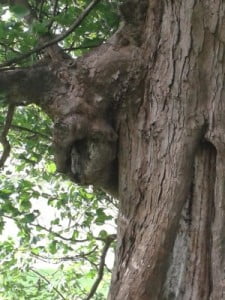