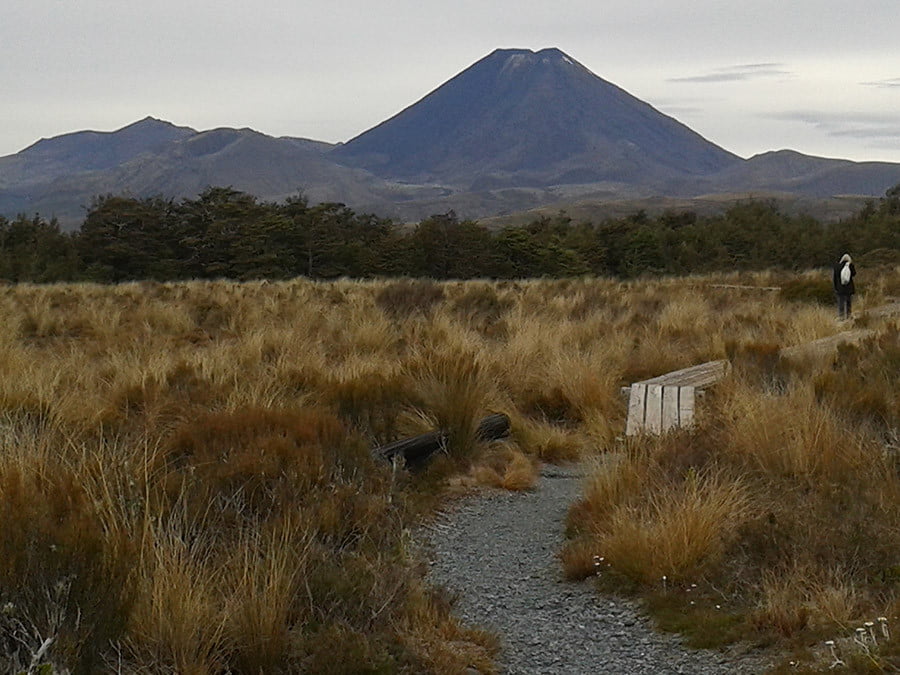 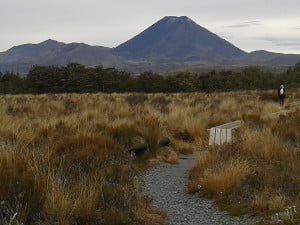 Recently I was staying at Whakapapa, on the slopes of Ruapehu, and on a fine day or a cloud day one begins to find that time passes between breakfast and lunch simply because the landscape absorbs your attention. The landscape at Tongariro National Park is constantly changing. Light shifts, colours change, clouds hang more heavily, mist wreaths and then by some unpredictable accident it all lifts and reveals. To stare at Mt Ngauruhoe is to forget what you might have said or thought, in fact all thinking disappears in some kind of vapor and you find you have been staring at Ngauruhoe for sometime and you’re hungry.

When I arrived at this little cabin on the mountain, I noticed that the seat that would be the seat for glooping faced away from Mt Ngauruhoe, I wondered a lot about this. I sat on that chair in the mist and the cloud and then the mountain revealed itself and that was when I lost my thinking. I had to start walking to find my thinking and I had this thought that the people before me knew well, yes, looking at the mountain could be dangerous. It could turn a sane person into a gormless one with very little to say on the everyday state of affairs. This could be the danger of glooping.

To even write about the art of glooping is to move in a spiral. There is a tendency when glooping, (and talking about glooping) is to find yourself up the farm track and not on the main road, and you’re wondering how you got here or there depending on your perspective.

I thought glooping was an actual word, as Mike and I have used it often enough, but in fact I think we might have made it up. It was the perfect word to describe that sort of gaze that fell upon one half way through lifting the spoon to the mouth at breakfast. It’s a kind of a gaze that gets swallowed up by landscape. We have breakfast out on a little balcony that looks out over the bush. There is a good amount of birds that come and do their thing in the large kanaka tree or the nikau and next thing you know you are glooping. Glooping is not moving into fantasy in the mind or serious daydreaming. It is a form of gazing that occurs through relationship to what you see. It is not intense observation of detail although this can occur.

In the art of glooping something happens through the gazing. There is a leap in the mind and then slowly there is a thought (unless you have been staring at the mountain) and there is revealing of something that was hidden. The art of glooping transcends pressure, expectation and strategy. Glooping done together is very harmonious, having a companion glooper is an accidental situation and can definitely not be analysed.

There is no real handbook on how to gloop. There are however some helpful hints. One needs to pause and look out. This pause is not removed from the environment, the landscape itself is inviting you, nor is it external to the present. One’s gaze may catch the upward movement of a cloud, the hanging mist in the hills or a heron folding its wings as it settles awkwardly. Glooping can settle on something and then drift on. Glooping is like a meandering tourist that locals tend to dodge around whilst on a mission. The rush rushes past in the process of glooping

There’s this blackbird in this garden that I think takes glooping to the next degree. At first I thought there was something wrong with it because it would suddenly and literally drop its ‘jaw’ beak open and turn its head and look at the sky and not move. Sometimes it will spread out one wing. When it first did this I thought it was dying. After a while it started moving again quite normally getting on with blackbird business. I think it discovered glooping. You may find with glooping that you can gloop surreptitiously, and that you don’t have to look as gormless as the blackbird did, this may take practise. Good luck and remember that glooping, well, just happens.

A Sunday a good day for glooping