Assists in maintaining personal boundaries, particularly helpful for those who absorb other people’s emotions and energies. 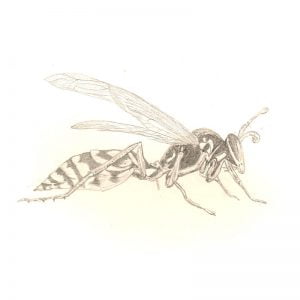 This remedy was made in the early summer from a busy family of female wasps feeding the larvae in a growing colony made in the eaves of a friends house. The wasps hovered and crawled around the rim of the small glass that made this remedy, as I watched them and found out more about them I felt more at ease with them than I ever did before. Like anything that stings we tend to have fear or anger towards them. In New Zealand particularly, with the history of the German wasp that spread rapidly in the 1950s it became so aggressive that schools in Westland were closed because of the immense nests it built. Joanne Lauck suggests that animals that sting are allies of growth. She suggests they arouse us out of our complacency and push us past the edge of what is familiar and comfortable. In writing about the Chinese paper wasp I have drawn from Patrick Dale’s book A Houseful of strangers published by Harper Collins New Zealand 1992.

Assists in maintaining personal boundaries, particularly helpful for those who absorb other people’s emotions and energies.

The remedy assists in transforming weaknesses into strengths. Rather than feel aversion to the difficulties we face in life, or to try to rid ourselves of these difficulties in an angry way, we begin to activate a healing and transformative journey in working and being with these challenges. It also activates compassion for people without a need or desire to carry others burdens. The wasp remedy looks after itself first. It’s also about taking responsibility for the whole of oneself and facing your own burdens and correctly working to become free of them. The wasp remedy is an initiator into life, a powerful reminder that the sting can push us into action that is better aligned to ourselves.

The Chinese Paper Wasp was accidentally introduced to New Zealand around 1979.

It is black with vivid yellow stripes. It has a very tapered waist and its wings droop down. It builds its nests above group and is made up of paper like octagon cells.

Wasp colonies tend to die out during winter; it has to restart the colony each spring. During the winter the young males and females hibernate, clinging to the underside of the abandoned nest. In the spring the females whether fertilised or not help construct the new nest and the males die.

The fertilised queens deposit eggs into the new cells and then assist the unfertilised workers gathering honeydew to feed to the larvae, which are attached in the cells. As the larvae develop the adults feed them protein rich food like cicadas and caterpillars that are macerated. When the larvae are fully grown they spin a silken cover over the entrance of the cell and pupate. The adults that emerge are all females. At the end of the season the queen lays unfertilised eggs, which turn into males.